It’s easy to discount the familiar; thats why those who live near Mount Kenya have never climbed it and why not everyone at the coast goes to the beach on a daily. I say this because just as I have never written an article on how to camp neither have I written about Olorgesailie. This is strange because I visit here so often I guess it became too familiar to me hence the laxity in writing about it. However I thought I’d share my special spot and made a call out for any Instagramers who wanted to head out for a night and get their astrophotography on and this lit the fire that finally led to this article getting done. 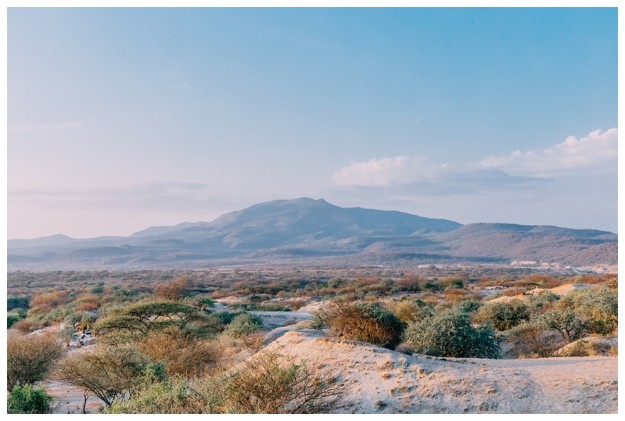 Olorgesailie Prehistoric Site has excellently preserved biological and cultural evidence about man’s evolution made possible by heavy falls of alkaline volcanic ash all the way from Mt. Suswa and Mt. Longonot. The site is located on the floor of the Great Rift Valley between two extinct volcanoes, Mt. Olorgesailie and the Oloroka Range in a lake basin that existed during the latter part of the middle Pleistocene period, probably between 1.2 million years to 400,000 ago. The large large shallow lake that attracted wild animals like extinct forms of hippo, elephant, zebra, giraffe, and baboon .

The site is world renown as the “factory of stone tools” and has highest number of hand axes anywhere in the world representing some of the first camping places of early man.

This is going to be short as its only 70km down the Magadi Road of about 1hr 30min from Nairobi CBD.

The road to Magadi has recently been redone so 4WD not necessary. However be warned your choices to access Magadi Road are still between Ongata Rongai where Nairobi’s traffic jams are brought into this world kicking and screaming, or the Ngong Town – Kiserian road that eats shocks for breakfast.

So after my Instagram (IG) request I heard from Solo and Irungu and we made plans. Strange how you always kind of ‘know’ someone from seeing their work on IG but its still slightly nerve-wracking meeting them in person for the first time. It was quite funny when we finally met and on of the first things said was ‘You’re so tall!’ and the other was ‘You’re so much shorter than I imagined.’ Introductions complete, trip was on. 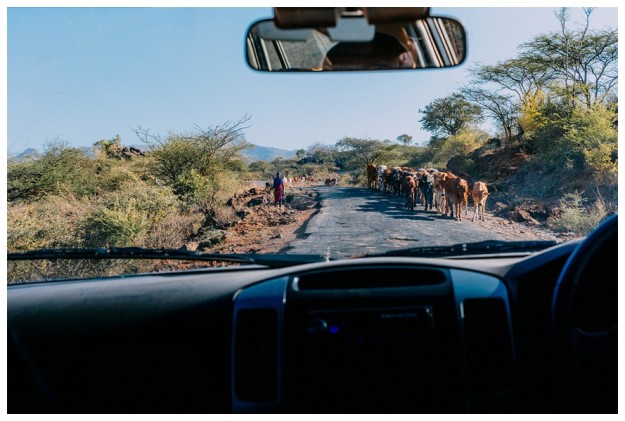 What I love about heading down this road is immediately after Olepolos Country Club (great lunch stop) you are in a totally different world and so close to Nairobi! 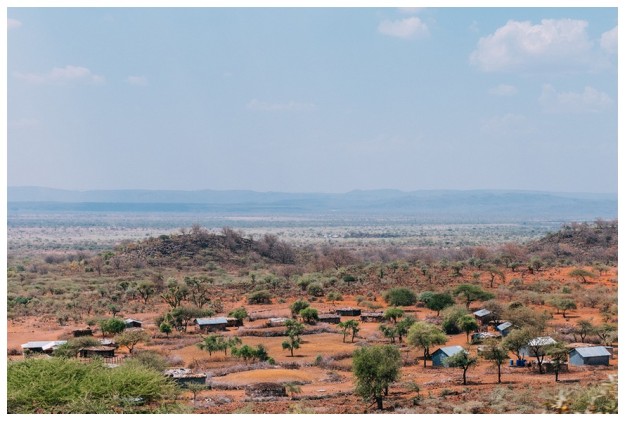 We get to Olorgesailie at midday. Below is the reception and entrance to the museum and the excavations.

Exterior of the bandas, nice view. 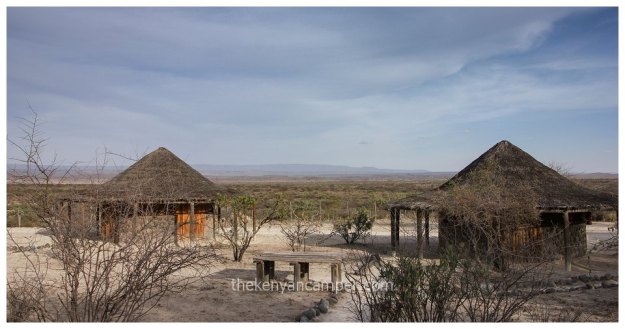 I check into the only available banda (the other 2 are being renovated and should be done soon). I really like these rooms, simple but obviously someone put some thinking into them. They’re just perfect for a place like this. 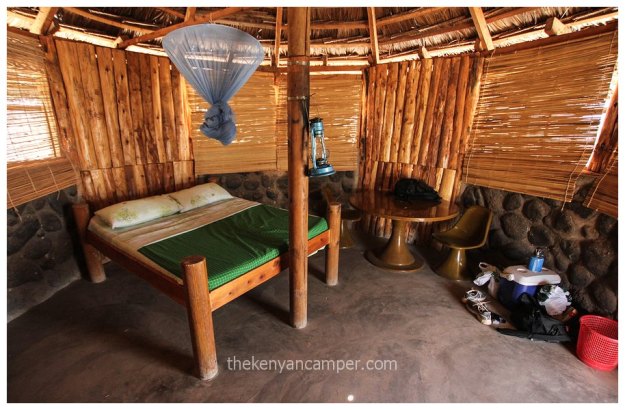 The guys are camping out tonight. There is limited shade here so if you’re in a larger group camping out arrive late afternoon. 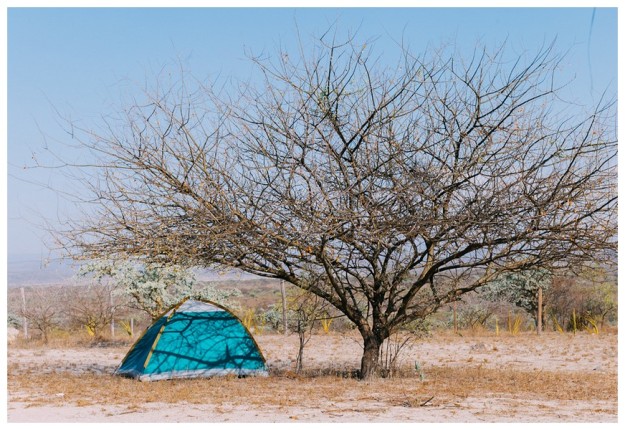 As we plan to shoot later in the evening we spend the afternoon lazing around, talking photography and scouting for shooting locations (sounds fancy but it ain’t, just involves walking around). 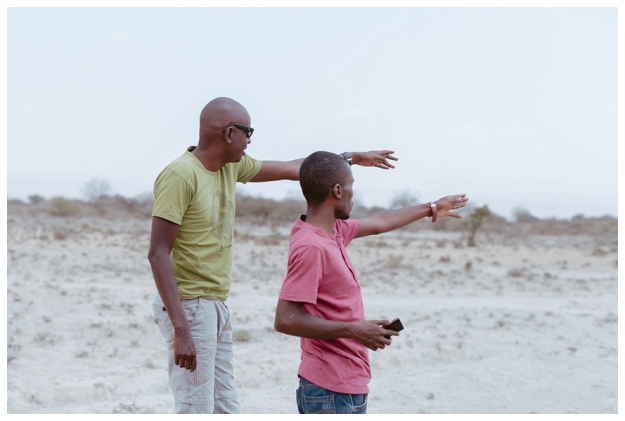 As evening comes our witching hour has arrived so things quickly become helter-skelter as we rush from spot to spot taking shots in the evening light. 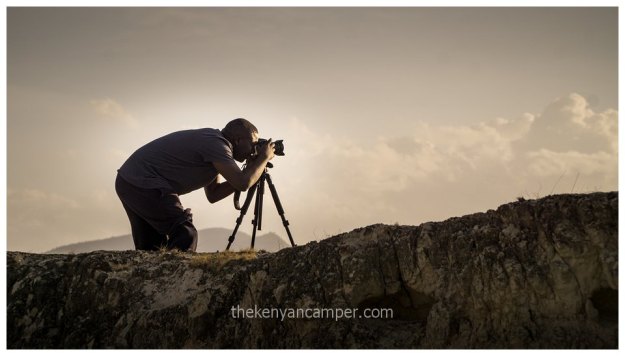 It’s very interesting seeing guys who’s work I admire create their shots. Everything is so meticulously planned and thought out, a far cry from my own ‘pray and spray’ methodology.

But what fun getting a behind-the-scenes look at how different photographers create different shots. 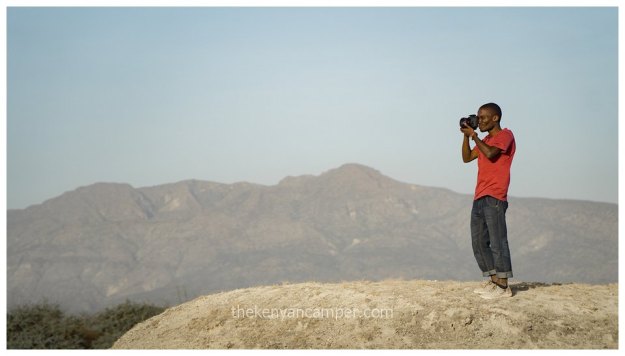 My own attempts are not too shabby either.

Night falls and the work begins. I love this area specifically as the skies are clear for many months of the year. 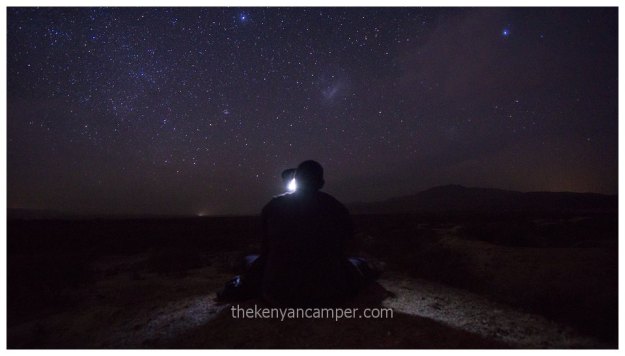 Getting the correct focus in the dark is 90% of the game, so many times I’ve gotten back home, looked at my photos on a computer and gone ‘F**k’. 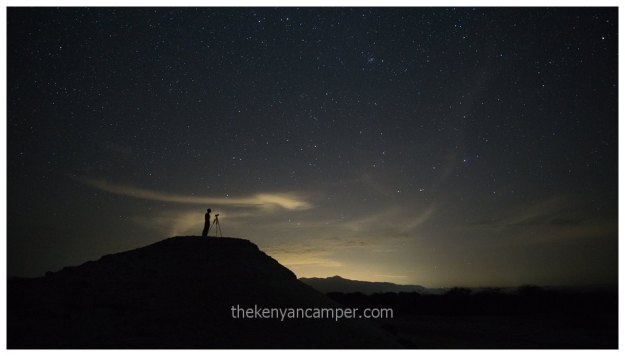 The background glow is from Oltepesi town with Mount Oloroka in the background. Clouds can add to your image if they behave. 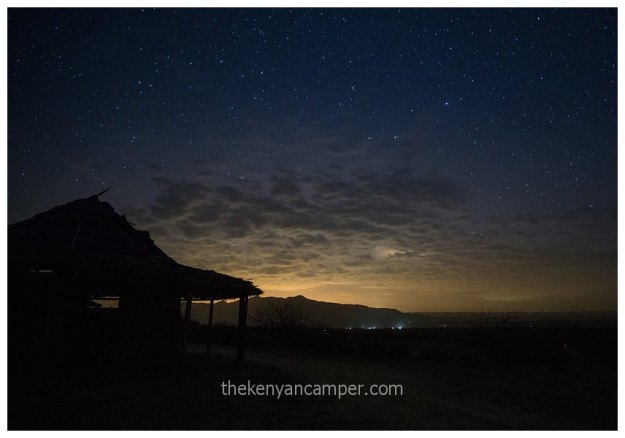 Stars, stars,stars. I would really like to see more Kenyan photographers get into astrophotography, you don’t know how lucky we are here to have dark skies. 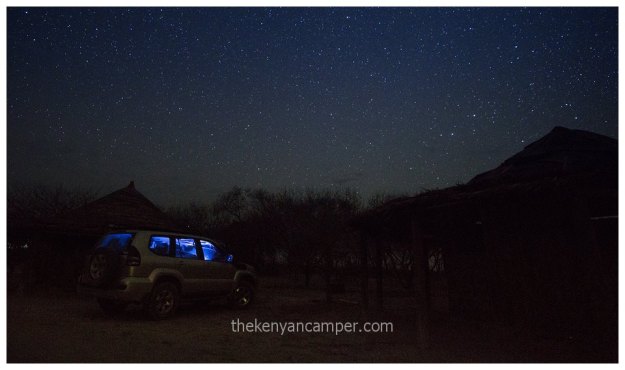 After a great nights sleep I’m up at 5:30 to get some morning shots. I find the guys at the same spot I left them last night, the were up shooting timelapses most of the night and someone mumbles ‘we only got 2hrs sleep’. I need to be more dedicated. 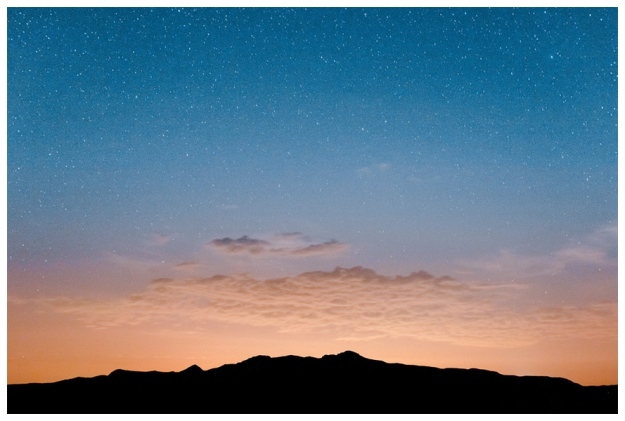 Round 3 of shooting begins. 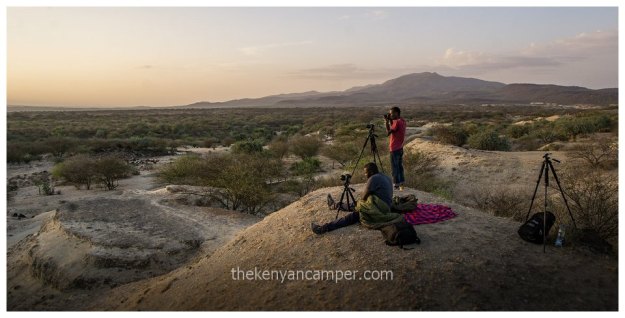 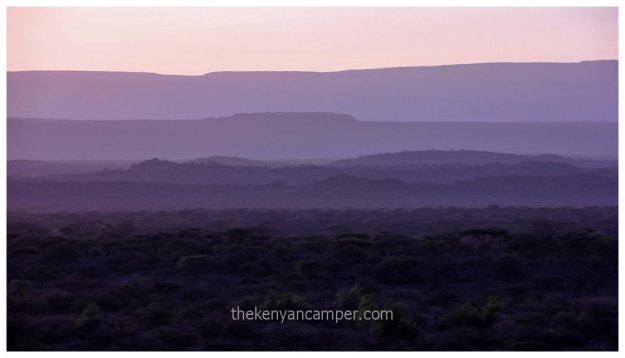 I always prefer my shots to have people in them so I’m shooting around them. 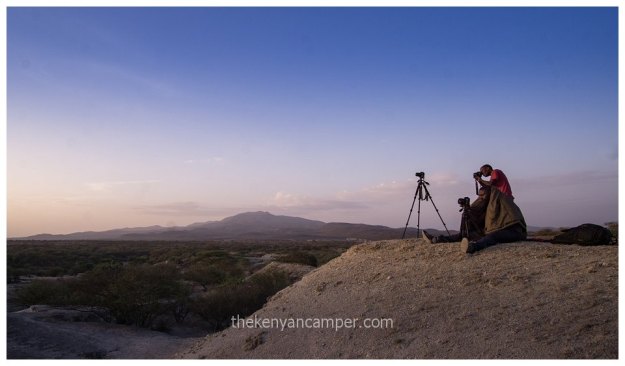 The sun here is so hard, 5min after it comes up it’s too bright to continue. Timing is key. 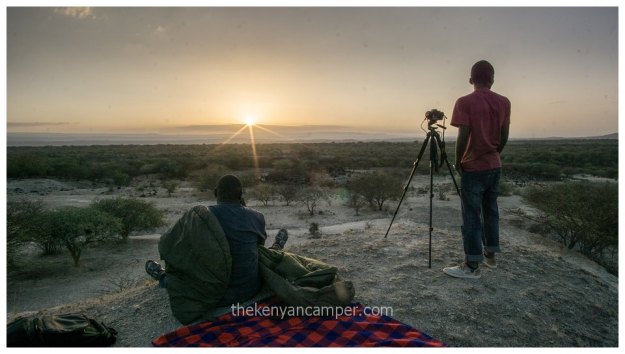 My favourite photo from the trip, sleep catches up with Solo after that sleepless night. Its time to head home. 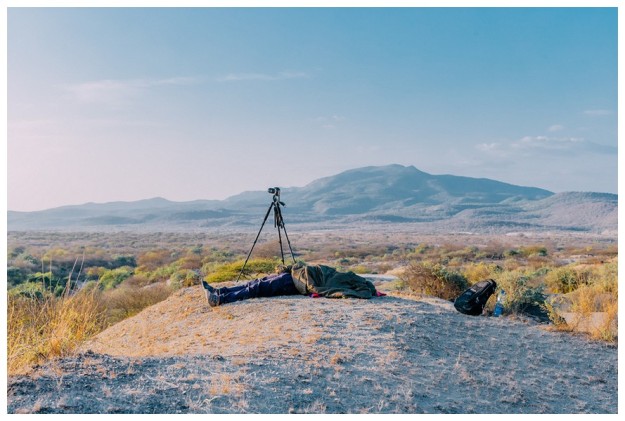 Should be quickly noted that if you’re into birds and bird photography mornings here are great for that as well. 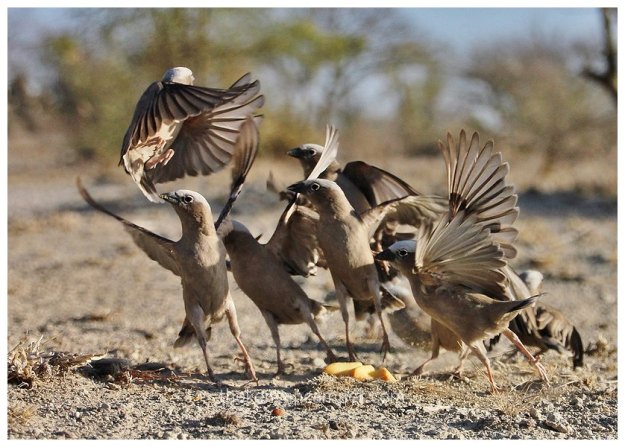 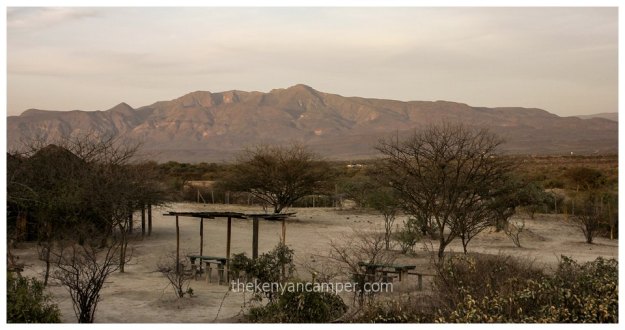 In closing I just have 3 quick observations:

Make sure to check out Solo (@rootsofafrika) and (@irungu_) on Instagram to see more shots from this trip. Oh yeah, and of course mine @thekenyancamper.

Until next time…I’m out.