Hello again, as a follow up to my recent article on the the beautiful area of Mount Kasigau, I thought i might give you a little behind-the-scenes look of some of the things i got up to there. There is usually so much more to the areas and people I write about, unfortunately not everything can make it into the articles, and if i told you everything there wouldn’t be any reason for you to visit now would there?

I’ll break it it down into 3 short stories; one is of a man struggling with a failed project, a group of women with mad skills and finally a keeper of a quickly fading history.

The bandas were part of a program started by the United Nations Development Program and the African Wildlife Foundation in 2001 as a means of protecting the Kasigau Forest by enabling the communities around the mountain to earn income through tourism.

For the first 5 of so years as with many development projects all looked rosy. The bandas were put up in a year, managers were trained, a website was put up and the bandas had many visitors especially foreign volunteers and students working on projects in the area. The air was chock-full of ‘capacity building’ (cough cough), ‘increased livelihoods’ and ‘poverty alleviation’.

15 years down the line the project is on it’s knees. The trained managers after being ‘capacity built’ went on to start their own projects, the website is offline because they couldn’t pay the Ksh 4000 annual hosting fee (actually no one even remembers who made it or where it was hosted so even paying the fee wouldn’t solve the problem). The decline in Kenya’s tourism due to terrorism has also had a big effect on the number of visitors they receive.

This is what remains of the banda at Rukanga Village, one of the 5 bandas built. Someone’s made themselves at home.

However compare it to the banda at Kiteghe Village.

People like Maasai still believe in the project and continue to keep it going, even when the visitors book looks like this.

A really commendable effort by Mzee Kamando and the people of Kiteghe, they are open for business and awaiting your visit. However marketing the bandas, especially through the internet, remains a very major challenge.

Even before I had landed in Kasigau i knew one of the things I had to do was meet some of the famous basket weavers this area is famous for.

Some of the members of Ikonge group I was privileged to meet. to meet; Gloria, Fridah, Rachael, Flora and Margaret.

Ikonge Basket weavers is but one of the groups around the mountain and was was established in 2002 by the women in the Kiteghe area. The group of around 50 women was formed to harness the power of numbers to increase incomes and educate their children by selling their baskets.

And they do make some awesome stuff. 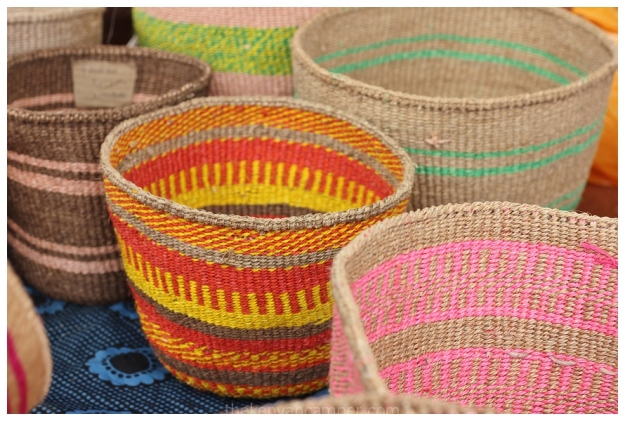 I was like a kid in a candy store, i wanted to buy everything!

The women have challenges accessing any of the government funds allocated to women’s groups, I was unable to get a satisfactory answer as to why this is so. They have been unable to penetrate the wholesale market and as such currently rely on buyers (many foreign) who buy their baskets at low prices, export them to international markets and are thus able to sell them at a premium.

Double-edged sword this one. On the one hand these buyers help their business, on the other hand the group does not receive the full benefit of their baskets as a finished product.

It would be great  some of the chamas in larger towns could partner with women’s groups like these as a means of knowledge transfer, marketing and assistance with access to markets. There is really a large gap between well made Kenyan products and the market at large. Once again the how-to of marketing rears it’s ugly head.

Ikonge Group can be reached by calling the Regina (Chairlady) on +254-714-718354. You can aslso read more about the weavers of Kasigau on https://kasigaubaskets.wordpress.com/

David is one of the rare breed of people that i truly enjoy meeting; he is a curator of his very own museum located in Rukanga. I often admire people people like this, more driven by passion than by monetary reward.

David insisted on donning the tools of his trade for this photo, I was laughing too hard to say no.

The museum (it’s one room but to call it anything else would be dishonest) was established to promote culture, tradition and arts of the Kasighau people. David has always had a keen interest in his peoples culture and tradition and but as traditional ways slowly give way to modernity, he thought it was inherent that he try to find a way to preserve the information relating to the people of Kasigau.

Don’t be fooled, out of our 45min tour this is the only 3 seconds David was not smiling.

To this end he has traveled all around the area collecting many interesting artifacts that are all displayed at the museum and Davis himself will take you around giving the facts as relate to each piece. Its a mish mash of items, musical instruments, stools, baby carriers (this part is hilarious) but if you really would like to know some of the history attached to the area, David is the man to talk to.

The challenges here are are quite different from the 2 above. David wishes that more young  Kenyans were aware of their history and that the importance of museums such as his were recognized both the County and National governments.

As i said before it’s clear he doesn’t do it for the money (entrance and the tour costs Ksh 200 and all this goes toward buying artifacts and keeping the museum going) but recognizing such curators of our common history would go a very long way in encouraging them to continue with this this most noble of pursuits.

Might seem that i did a bit of NGO – bashing but this could not be further than the truth. I realize that many NGO’s in Kenya provide much needed assistance to numerous communities. But in as much as they like to talk ‘sustainability’, they themselves are not a sustainable solution to what ails us.

At the end of the day, in all my travels, the commonality I have encountered is that people want to control their own destinies. To choose their own paths in life and to earn an honest days pay for an honest days work.

How can this be achieved? I don’t have the answers. But i do know this, by travelling around Kenya, we begin to appreciate and as a result add value to what different communities are doing all over this beautiful country we call home.

I’ll be sharing a few more photos on Instagram, hit that ‘follow’ button chap-chap. And still on the ‘behind the scenes’ theme I’d like to thank one lovely lady S without whom some of the images you see on this blog could not have been captured. Much appreciated.

11 thoughts on “Mount Kasigau – Behind The Scenes”